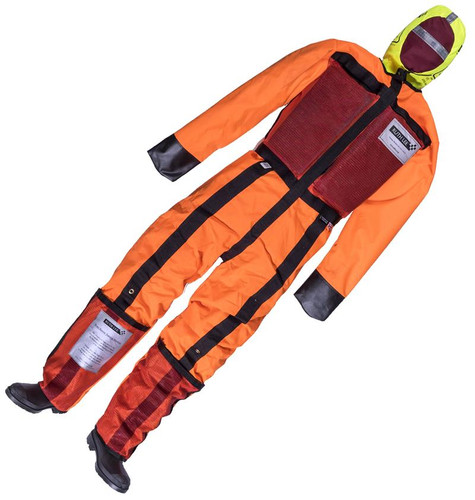 Built to the same tough construction standard as the General Use Manikin, the Man Overboard Water Rescue Manikin is built to simulate an unconscious victim in the water, floating at an angle of 45 degrees with just the head and shoulders above the water. It can be made to Float Horizontally by simply removing the 6 foam pieces from the front chest of the overall and add three pieces to the pockets on each leg. The secret to the performance of this manikin is the balance between the weighting and the buoyancy - the tough Nylon mesh carcass allows the water to penetrate rapidly and after a few minutes the legs will drop below the surface, resting at an angle of about 45 degrees with just the head and shoulders visible above the surface. It will take seconds to swap between a horizontally floating manikin and the standard position.

The head is color-coded with a Red face. Strong plastic strips in the manikin run from the shoulders to the knee. The strips maintain overall flexibility but don't allow the manikin to bend in half to aid with training with stretchers. The outer carcass is constructed of heavy duty open mesh reinforced with webbing. Non-absorbent closed cell foam - water absorption : 1 Day < 0.1 (DIN 53428 1986) 28 Days < 0.5% VOL.

Fox Eye Shield With Cloth Similar to the Grafco Fox Aluminum Eye Shield, this eye shield is made of